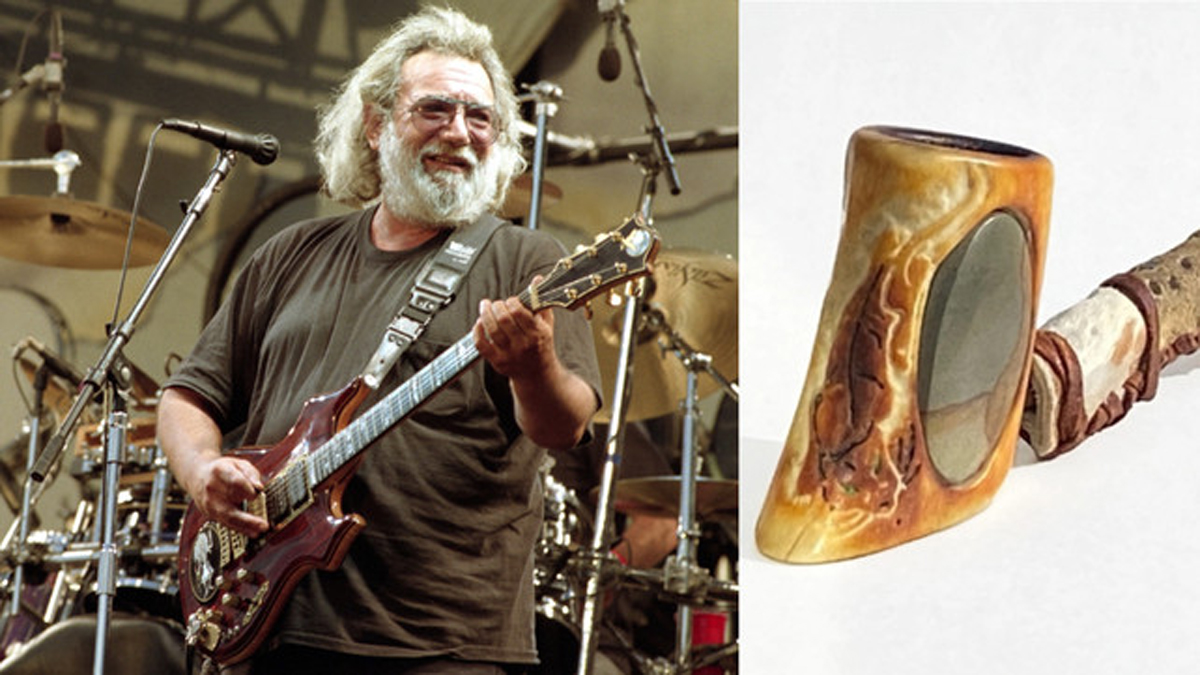 A bone-and-leather pipe apparently left behind at a collaborator’s house by Jerry Garcia has turned up at a Marin County antique shop. It’s not just any smoking paraphernalia, either — and sorry to say, but it’s not for sale.

That may be a shame for some dedicated Deadheads because the piece sounds like quite the unique cannabis score. The pipe has a tiger carving on it, and another design from Cats Under the Stars, a solo album that Garcia put out in 1978. The feline references are likely connected to the famous guitarist’s penchant for dubbing his instruments “tiger.”

“My shop is fun and a lot of fun stuff walks in the door,” said the antique store owner Steve Cabella to the Los Angeles Times for a report on the pipe by staff writer Nathan Solis. “But when this walked in the door, it was simply one of the more interesting things that have walked through that door.”

Cabella’s store is called the Modern I Shop, and is located in San Anselmo, a town located to the west of San Rafael, and 20 miles north of San Francisco. But take a breath before you hop in that VW van to visit the pipe — Cabella has not confirmed that it will be on display (or that he’s using it to smoke nugs), but only that he wants the pipe to eventually be in a museum.

We suspect everyone knows this, but Garcia is a marijuana icon whose band inspired a large swath of stoner culture. The term “420” was popularized through the band, which counted the original Waldos crew among its extended family. Today, Garcia serves as the inspiration for a line of pre-rolls and flower called Garcia Hand Picked.

So how did the big cat piece get to the shop?

Not all details are confirmed, but Cabella thinks the pipe began its journey when it was gifted to Garcia by Owsley “Bear” Stanley, who you may recall from the 1960s acid dealing scene. One of the first big-time producers of LSD, Stanley was also the Dead’s audio engineer, and apparently made his share of pipe-making skills in prison. While serving a three-year sentence after the cops raided his California acid lab, the guy apparently got heavy into crafts.

However, some mystery does surround this origin story of the pipe — Stanley’s son Starfinder said: “All of his sculpture was very distinctive, and this looks nothing like his work,” in an email to the Los Angeles Times.

At any rate, it would appear that Garcia left the piece at keyboard player Merl Saunders’ house after they made the 1991 album Blues From the Rainforest. 30 years later, a deep clean turned up the piece, which had been stored in an envelope dated from 1985. Saunders says the pipe was a gift from Garcia, even though Saunders does not use marijuana himself.

Kind of makes you want to tidy up around the home.