CBD oil and cancer: What the research shows 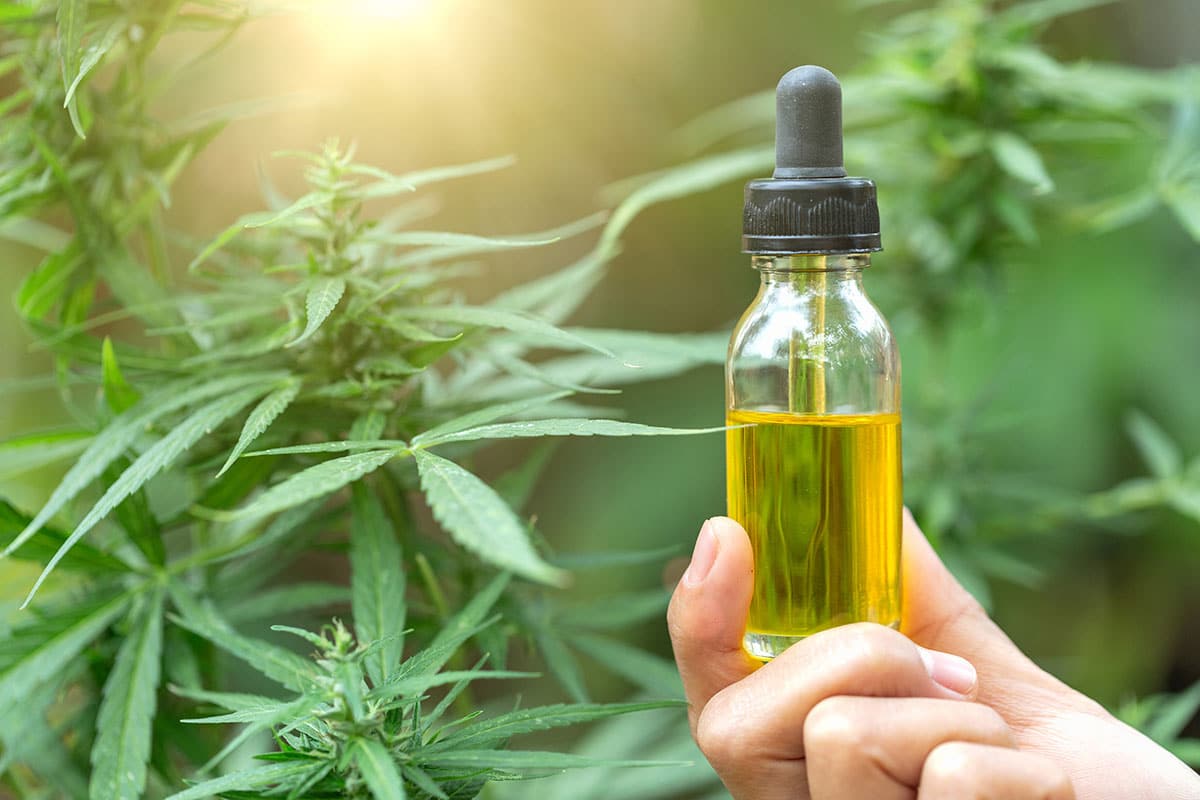 CBD oil has long been utilised for its various therapeutic effects, but what about its effect on cancer? Read on to find out more about what the research shows

Here, OilsBySimpson Founder Kevin William Simpson discusses how CBD oil shows promise to lower some risk factors for cancer and mitigate cancer treatment side effects, but more studies are needed to examine whether it can prevent cancer.

CBD oil is a type of cannabinoid derived from cannabis. While there is continuous controversy surrounding CBD due to recreational marijuana use and the side effects that arise due to this, there is also growing awareness of CBD’s various benefits. Unlike the cannabinoid THC, CBD does not create the “high” feeling of intoxication and has been involved in many therapeutic uses, varying from mental to physical. Some potential medical benefits of CBD oil include anxiety and stress relief and pain relief, including both chronic and muscle pain. CBD can even have neuroprotective effects.

Cancer is the growth and spread of abnormal cells, and it is one of the more prevalent non-communicable diseases in modern society. These abnormal cells can be malignant or tumor cells and can destroy body tissue by spreading and invading. While there are over 100 types of different cancers, some of the more common ones are breast, skin, colon, and prostate cancer. The high rate of cancer prevalence worldwide leads to a similarly high mortality rate: about one out of every six deaths is attributed to cancer. Because of this, identifying and developing effective treatments for prevention and the subsequent side effects of cancer is of the utmost importance.

Studies on Cancer and CBD Oil

Many studies investigating the relationship between CBD and cancer involved mice or human cells in the lab. Thus, the research is still in the beginning stages, and more studies specific to people with cancer are needed before conclusive claims can be made. Ongoing research looking at CBD and cancer is primarily focused on two categories. Firstly, whether CBD can slow or even stop cancer growth, and secondly, whether CBD can relieve some of the side effects of cancer and cancer treatment, such as pain, nausea, and anxiety.

A 2014 study looked at experimental models of colon cancer in vivo and suggested that CBD may inhibit colorectal cancer cell proliferation, and it had no effect on healthy cells(3). Similarly, a 2019 study showed CBD to induce apoptosis by regulating various anti- and pro-apoptotic proteins, decreasing overall tumor volume(4).

In females, breast cancer is a leading cause of death and the most common cancer worldwide. Cannabinoids have shown to have a modulatory effect on hormone-sensitive breast cancer cells by involving themselves within receptor-dependent and independent regulation of invasion and proliferation, both crucial hallmarks of cancer growth(5). In particular, CBD was shown to ultimately result in activation of the intrinsic apoptotic pathway present in breast cancer cells, leading to cell death. The 2011 study also outlined CBD’s role in the generation of reactive oxygen species (ROS). This process is crucial since ROS inhibition blocks the activation of autophagy and apoptosis, meaning damaged cells can be cleared out, and cell death can occur in diseased cells(6).

cbd oil and cancer (CBD oil, CBD, cancer)Lung cancer is another cancer with a high prevalence and mortality rate worldwide. Ninety percent of lung cancers can be attributed to tobacco smoking, amongst other factors, such as exposure to chemical agents or radiation. A recent study showed the expression levels of cannabinoid receptors to be a potential marker of survival in patients with non-small cell lung cancer. CBD was also able to inhibit the expression and growth of epidermal growth factor receptors in lung cancer cells(7).

CBD Oil as a Preventative Treatment

With the rise in the prevalence of numerous cancers, more attention has been given to preventing this disease. It is well acknowledged that cancer development is highly influenced by lifestyle choices, such as diet, exercise, and stress levels. Prevention of cancer is vital, as once the tumor cells start to spread and increase it can be very rapid and uncontrollable. There is also a higher chance of eliminating the cancer cells by chemotherapy or radiation if caught at an earlier stage.

Some common preventative treatments include a healthy diet with lots of fruits and vegetables, avoiding tobacco, maintaining a healthy weight, and regular screenings and self-exams, especially for breast and skin cancer. Most of these cancer prevention techniques are useful, as they help lower several key risk factors for developing cancer. These include elevated blood pressure, high cholesterol levels, inflammation within the body, and obesity.

Diets high in fat and cholesterol often can lead to obesity, a significant risk factor for cancer. When it comes to CBD and lowering cholesterol levels, the studies are divided.

On the other hand, a 2011 study described the potential relationship between CBD use and cholesterol metabolism-related genes, suggesting that CBD treatment can regulate cholesterol homeostasis in microglial cells(9).

Persistent high blood pressure is often associated with an increased risk of certain cancers, including lung, oral, and colon cancer. The research seems to be slightly more conclusive regarding lowering blood pressure. A 2017 study involving nine male volunteers were either administered 600mg of CBD or a placebo. Cardiovascular parameters were then monitored. The results showed that acute administration of CBD reduces resting blood pressure and blood pressure in response to stress stimulus(10).

Because CBD is a vasodilator, it can cause relaxed arterial walls, allowing vasodilation in your blood vessels to occur. This allows blood to flow with more ease, subsequently lowering the pressure needed for circulation and reducing blood pressure(11).

Chronic inflammation is involved in cancer growth, as over time, cell damage can occur, subsequently affecting how cells divide and grow. This, in turn, may affect the presence of tumors and their growth. Alongside its effects on skin inflammation, CBD can act as an effective anti-inflammatory agent for arthritis, vascular inflammation, and nervous tissue inflammation.

Cannabinoids, including CBD, have been seen to suppress inflammatory responses, which reduces symptoms of diseases involving inflammation. This is due to the properties of cannabinoids regulated through pathways involving suppression of cytokines in inflammatory sites and activating apoptosis in immune cells. Thus, CBD may be a beneficial preventative treatment for cancers that affect chronic inflammation within the body by inhibiting tumor growth(12).

Obesity is often linked to cancer due to several factors. Obese individuals often have increased insulin and insulin growth factors, which may help in the development of some cancers. These individuals also are more likely to have low-level inflammation, linked with an increased risk of many cancers. While obesity is mainly controlled by lifestyle factors, such as a healthy diet and sufficient exercise levels, many studies have investigated the relationship between obesity and cannabinoids, including CBD. CBD has been shown to affect weight loss and weight gain since one of CBD treatment’s main side effects is appetite change, both increased and decreased.

Out of a cross-sectional study of CBD oil users, around 6.5% found that they had increased hunger as a side effect(13), while animal studies showed that CBD had influences on metabolism rate and reduced food intake. This was because of the interaction between CBD and CB1 and CB2 receptors in the brain and lymphoid tissue, due to the receptors playing crucial roles in food intake and body metabolism(14). Despite these findings, research is still relatively limited, with more human studies required before any definitive claims can be made.

CBD Oil as a Treatment for Cancer Side Effects

Perhaps one of the most challenging stages of patient care required for individuals with cancer is dealing with the numerous side effects of the cancer disease itself and subsequent treatments. Cancer treatment options are vast, but they can include hormone therapy, immunotherapy, and chemotherapy. These treatments are highly taxing on the body and often result in a myriad of side effects, including insomnia, nausea, decreased appetite, and chronic pain.

Insomnia can be triggered by certain medications, which can disturb your natural sleep-wake cycle. This can then lead to excessive grogginess and fatigue during the day, with increased feelings of anxiety, since insufficient sleep is often linked to poor mental health. CBD may help encourage the feeling of sleeplessness in individuals on cancer medications, therefore regulating their circadian rhythm. A large case study published in 2019 looked at whether CBD could reduce anxiety and improve sleep in 72 individuals. After a month of consuming one CBD capsule daily, around 67% of patients reported better sleep and 80% reported lowered anxiety levels(15).

The main reason for this mechanism is the relationship between cannabinoids like CBD and how they can interact with the body’s endocannabinoid system. This system regulates a range of processes, including sleep, mood, and memory. Several benefits can occur when this is activated, such as increased muscle relaxation and mood stabilization(16).

Appetite loss, poor appetite, and nausea are some of the most common side effects of cancer treatment. Long-term appetite complications can be detrimental to the patient, as they could lead to insufficient nutrient intake and fatigue due to muscle loss. Most studies that research the relationship between CBD and appetite have varying data, with some showing weight gain and others showing distinct weight loss(17). Despite the inconclusive research, one thing is for sure: these effects on hunger and appetite vary depending on the individual, their genetics, and the type of CBD product used.

The relationship between CBD and nausea seems to be more straightforward. Research from 2011 suggests CBD and its interaction with the endocannabinoid system lead to the regulation of vomiting and nausea in both humans and animals(18).

Chronic and persistent pain can be highly debilitating to the cancer patient’s quality of life. The research on topical CBD products like CBD oil and their effects on pain management has been promising, with many recent studies showing CBD oil’s role in reducing inflammation and overall discomfort due to various health conditions like cancer.

A 2018 review looked at studies conducted from 1975 to 2018 to assess how CBD works in relieving chronic pain. A range of pain conditions was examined, including neuropathic and cancer pain. It was concluded that CBD was effective in overall pain management across the field, with little to no adverse side effects(19).

Overall, while the research has been promising, CBD treatment for cancer is still in the beginning stages. Cancer is a highly complex disease, with many risk factors and complications that can arise throughout diagnosis and treatment. The formation of tumor cells within the body also involves many regulatory processes, such as cell division, cell death, and metabolism.

While studies have shown promising CBD results in lowering several key risk factors for cancer, such as inflammation and blood pressure, results are still inconclusive for cancer prevention. On the other hand, CBD as an aid for cancer treatment side effects has increased in popularity in recent years.

Because this research field is still growing, an increase in the use of these products, including CBD oils, for common side effects of cancer, like pain and insomnia, is to be expected. More in-depth future research is required, especially involving human participants rather than animal models.

Keep out of reach of children. For use only by adults 21 years of age or older.a:0:{}