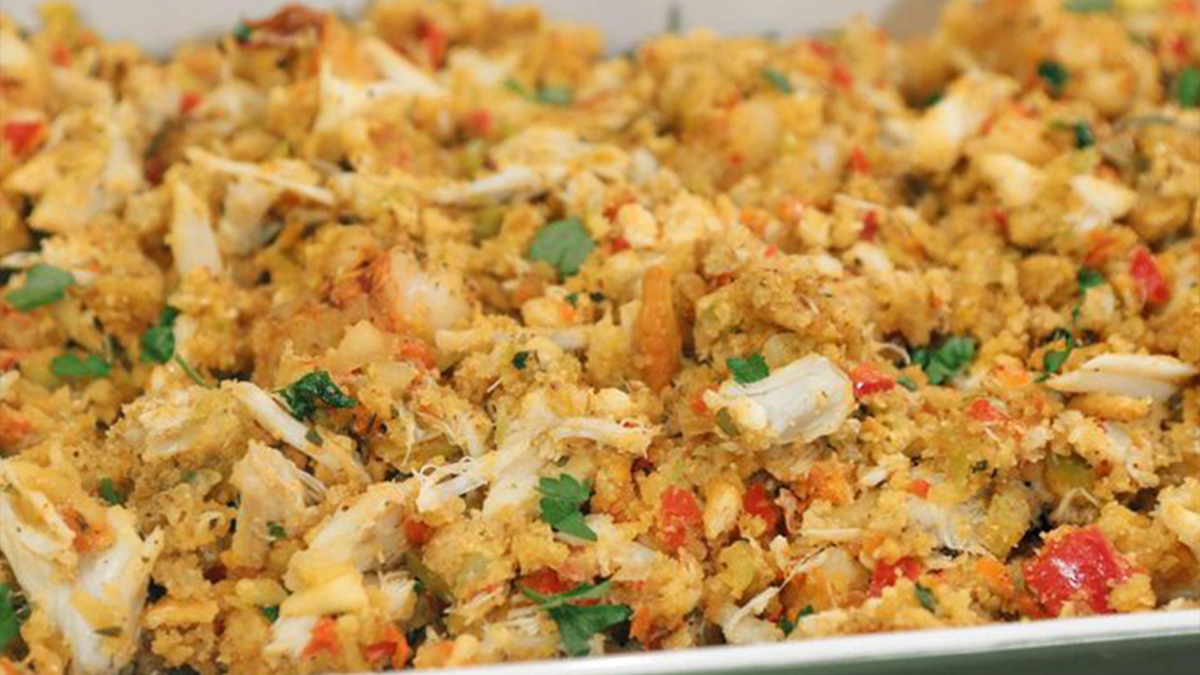 Thanksgiving has its classic staples and traditions, but depending on where you live and who’s at the table, the traditions tend to vary. Whether it’s green bean casseroles, deep fried fowl, turduckens, or countless other niche specialties and regional favorites, the holiday options are endless. So when Chef Daniella Davis sent us a recipe for her Infused Crab and Cornbread Dressing, our coastal sensibilities immediately leapt to vinaigrettes and blue cheese — we had a lot to learn about Southern cooking.

Thankfully, Chef Daniella, a New Yorker with skills routed in the American South, was happy to help, and broke down the dressing’s place as a down south substitute for stuffing, with dressing usually baking outside of the bird, unlike it’s cousin. With decades of experience in kitchens across the country, we couldn’t have picked a better teacher.

Chef Daniella started her culinary journey at the young age of five in a home video series with her father, the Daddy/Daughter Cooking Show, and picked her passion back up in college. She eventually began working behind the line at restaurants across Manhattan and Long Island.

In her personal life, Chef Daniella has been public in her fight with sickle cell anemia, a rare medical disorder that affects red blood cells. Askewing traditional opioid treatments, Daniella has found relief with cannabis, and transferred the benefits of medical marijuana into her cooking by adding infused dinners to the menu for her bicoastal private dining business, Dine In With Daniella.

To learn about more Southern Thanksgiving delicacies, the benefits and limitations of New York’s medical marijuana program, and more, MERRY JANE interrupted Chef Daniella’s labor-intensive Danksgiving preparations to pick her brain and find out how to heighten our own Turkey Day feast.

1. Toss crumbled cornbread into a large mixing bowl.
2. Place a large pan on the stovetop, and turn the heat to medium.
3. Add 2 tbsp of butter into the pan, and let it melt.
4. Once the butter has melted, and starts to bubble, toss in the chopped vegetables.
5. Cook the veggies until they are translucent, then toss them into the mixing bowl.
6. Melt 8 tbsp of butter, then pour it into the large mixing bowl.
7. Next add in the shrimp, and crab meat. Mix everything until well combined.
8. Sprinkle in the garlic powder, onion powder, pepper, salt, and old bay seasoning.
9. Fold all of the ingredients.
10. Pour in all of the vegetable broth, and mix.
11. Last, but not least, add in the beaten eggs, and mix everything until well combined.
12. Butter a 9×13 dish, and pour all of the dressing into the dish.
13. Smooth out the dressing, then cover the bake dish with aluminum foil.
14. Bake on 375 F for 40 minutes.
15. Remove from the oven, and let sit for 5 minutes.
16. Serve and enjoy!

MJ: You’ve been cooking pretty much your whole life, and have worked in restaurants across New York City. When did you first start to incorporate cannabis into your culinary world, and how did that come about?

Daniella Davis: Cannabis is actually still pretty new to me. I only started to cook with it in March of this year. I have my medical marijuana card here in New York, but personally, I am not able to smoke, but I still wanted to utilize the plants’ benefits. And I started making brownies and other edibles, but I figured that if I could bake with it, I could cook with it. So from there, it evolved from simple oils and butters to more in-depth uses of terpenes and really infusing my food with more than just THC.

You’ve been open about your fight against sickle cell anemia and your advocacy for medical marijuana as a replacement for opioids, can you tell me more about how cannabis has helped you personally, and how Dine In With Daniella has allowed you to spread that message to a wider audience?

At my first infused pop-up back in March, it was really geared towards medical patients, and specifically people that couldn’t smoke. I had a few women there with lung cancer who participated, who also have their New York medical cards, but could not smoke or vape. In New York the medical marijuana program has been around for years, but it is still very new. It is not advertised, it is often hard to find a doctor, and a lot of people don’t know that it is available to them, so it’s been amazing to be able to spread the word about the program, even if there’s still a lot of work to do to make it more accessible.

I heard that the entire Dine In With Daniella team is made up of women. How important is it to you to bring new faces into the cannabis space and demonstrate that the male dominated world of weed isn’t the only side of the industry?

Absolutely. And even since I’ve started hosting the infused dinners, I have met so many women who own shops and companies, and to see how far women in cannabis are already going. The women in cannabis movement is fairly big, but it is still new, so it’s amazing to start seeing new faces hosting events and then on the other side, seeing women make a name in the chef industry.

For men to rule over the professional chef industry is so crazy, when nearly every woman I’ve met knows the basics of cooking and then some. So it was always surprising to see the lack of representation of women in restaurants, but that’s changing now, and even in the private chef space where I am, a lot of women are now taking that route that was once dominated by men. You’re not restricted to two or three menus a year — you can showcase things like cannabis; it just gives you more freedom.

You host dinners in both New York City and Los Angeles, with features like a CBD cocktail bar and more. Do you plan out your meals differently based on the location of the event and who the clientele is?

I knew ever since I was a little girl that I was meant to live in LA. So the best way I knew how was to open up my services out there. I love living in New York, but I love being able to travel to the West Coast and experience the best of both worlds. Legally, in LA it is just so much easier. I am able to bring my meals to everyone, and not just medical patients. I am able to experiment and use so many more products that aren’t available to me in New York. I am hoping to make a permanent transition to LA soon — it just makes sense.

The crab and cornbread dressing recipe you sent over is taken directly from the menu of the Danksgiving feast that you’re preparing for the holiday. What else is part of your Southern/Caribbean Thanksgiving feast? And do you get to enjoy the day, or is it all work and no play?

So on the menu this year, in addition to the crabcake cornbread stuffing variety, I’ve got a gumbo mac and cheese, keeping it very Southern and seafood-based this year. I make a traditional gumbo roux, I add some andouille sausage, crab, shrimp, and chicken, cover that in cajun seasoning, then pile it into a pan of cheese and noodles. It’s one of my favorites. I’ve also got a nice and spicy jerk turkey, and tons more. Thanksgiving is my favorite holiday. I get to be as creative as I want, and I get to cook for so many people in such a short period of time. I love it.