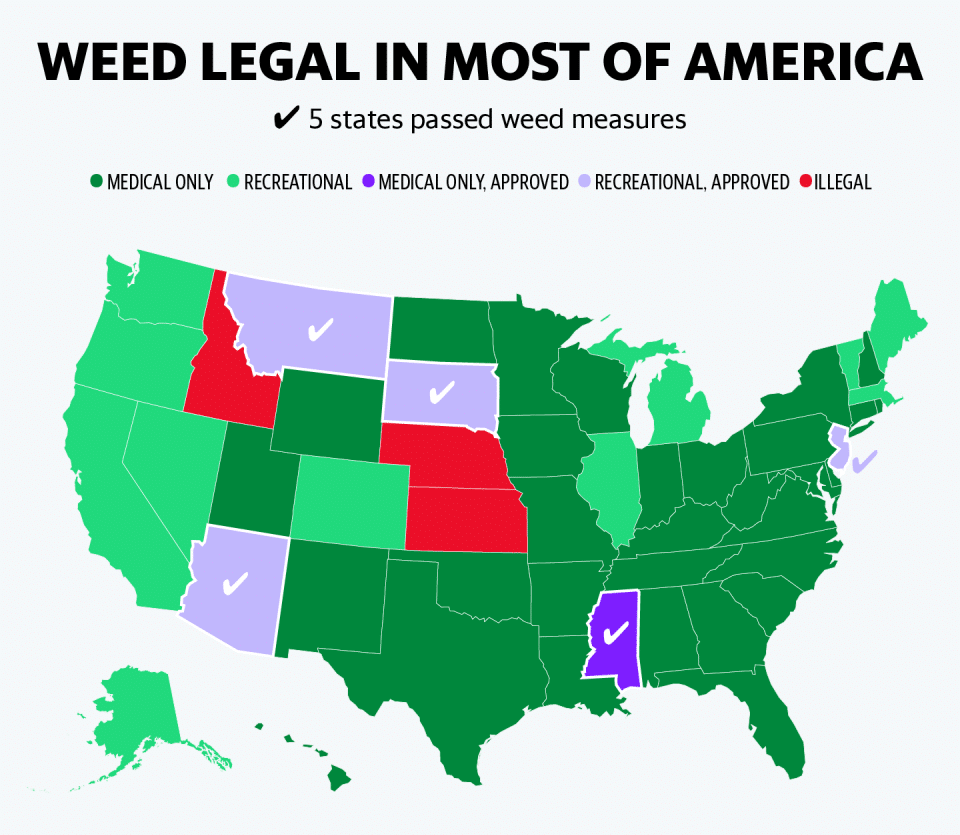 Arizona, Montana, New Jersey, and South Dakota are braced to become the latest states to legalize the recreational use of cannabis, with voters in South Dakota and Mississippi also set to approve ballot initiatives permitting medical marijuana use.

In Arizona, voters decided by a 60% to 40% margin in favor of Proposition 207, an initiative legalizing the recreational possession and use of marijuana by adults aged 21 and over. Arizona voters rejected a similar recreational measure on their ballots four years ago, though the state legalized medical cannabis in 2010.

New Jersey became the first state in the Mid-Atlantic region to legalize recreational cannabis, with Public Question 1 passing by a 67% to 33% margin. The state legalized medical use of the drug in 2010.

In Montana, voters favored ballot initiative I-190, which legalizes recreational adult use in that state, by a margin of 57% to 43%. Medical use has been legal in Montana since 2004.

Voters in South Dakota had their say on separate ballot initiatives legalizing recreational and medical cannabis use, with the recreational measure passing by a 53% to 47% margin and the medical initiative passing 69% to 31%. And in Mississippi, a measure to allow medical marijuana use appeared to gain more than two-thirds support, and could prove a major step forward for initiatives to liberalize cannabis in the Deep South.

If the results from Tuesday night’s elections hold, recreational marijuana will now be legal in 15 states plus the District of Columbia, while medical use will be permitted in 35 states plus D.C.

Despite the continued prohibition of cannabis and derived products by the federal government, more states have pushed to legalize marijuana in recent years—driven by evolving public attitudes and a desire to regulate the massive black market that exists for the drug. Those efforts have seen booming, lucrative cannabis industries emerge in states like California and Colorado, with hundreds of millions of dollars in tax revenues flowing into state coffers as a result.

With state and local governments across the U.S. facing major budget shortfalls in the wake of the coronavirus pandemic’s devastating economic impact, more states are expected to consider legalization measures of their own in the years to come. New Jersey’s successful initiative, for instance, is expected to spur neighboring states in the Northeast and Mid-Atlantic U.S. to follow suit—with New York Gov. Andrew Cuomo having expressed support for legalization in his own state.

Update, Nov. 4, 2020: This story has been updated to reflect the latest results of cannabis legalization initiatives in Montana, South Dakota, and Mississippi.

Keep out of reach of children. For use only by adults 21 years of age or older.
Rey Mashayekhi via (https://fortune.com/2020/11/04/states-legalizing-weed-cannabis-marijuana-2020-ballot-recreational-medical-arizona-montana-new-jersey-south-dakota-mississippi/)a:0:{}