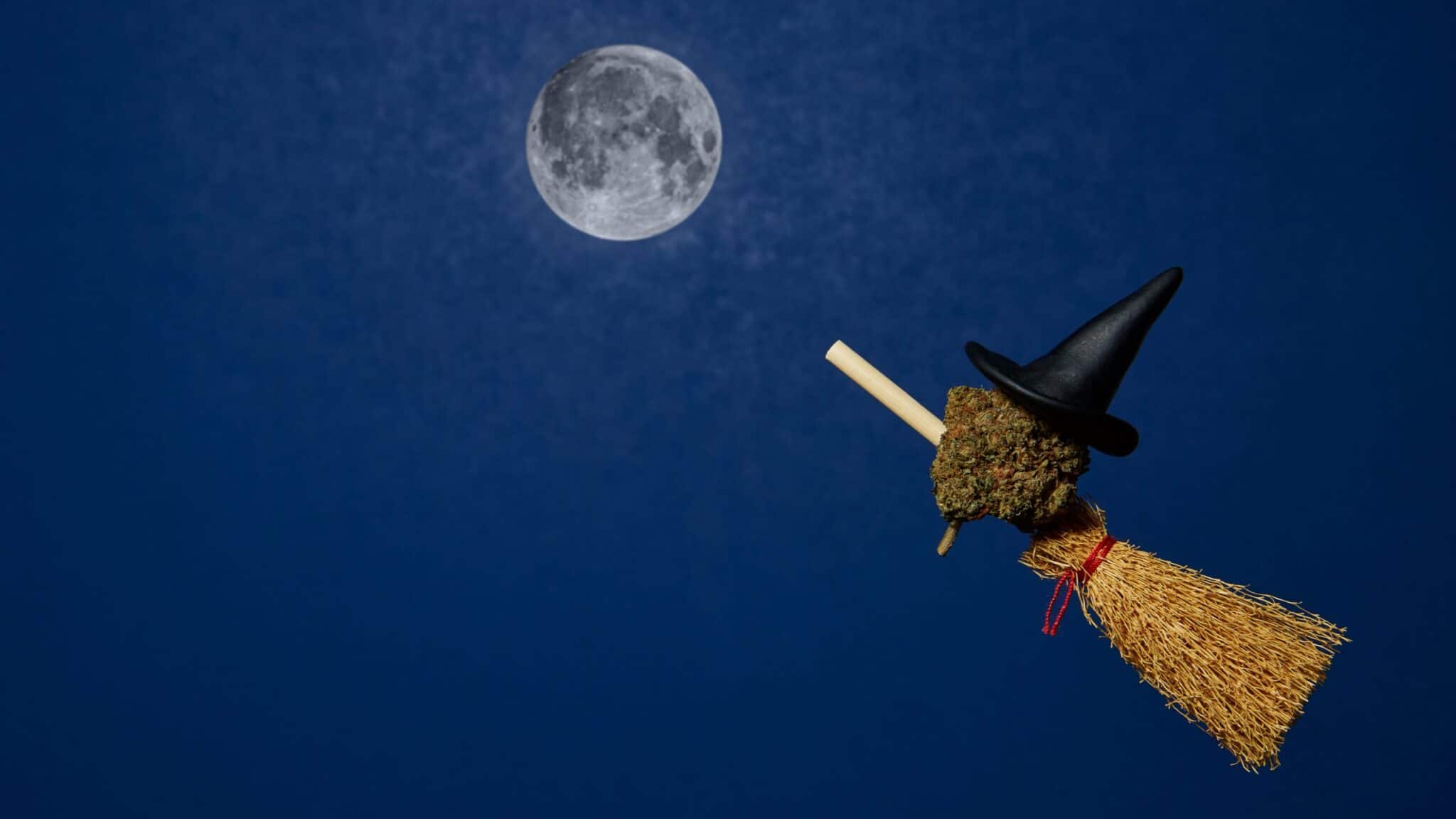 Spooky season has arrived, not just on the drugstore shelves, but also in our stoner hearts. Bereft of traditional revelries, however, 2020’s celebrations will require either more or less creativity, depending on where you sit on the cannabis spectrum. Whether you’re inhaling full-size snickers bars and watching a horror film marathon or Instagramming your would-be costumes at a zoom party, weed is going to make your Halloween altogether more fun.

The strains may have seriously Ooky-Spooky vibes, but don’t judge a nug by its label; each of these cultivars is exceptionally suited to all manners of wholesome — or terrifying — Halloween foolishness.

Keep in mind, your endocannabinoid system is like your fingerprint, totally unique to you. The effects described below may not line up neatly across the board for all users, and your experience is yours alone.

Jack the Ripper is a hybrid with a pronounced sativa bend, but who’s onset eases into a slow wave. Most users find the high both powerfully euphoric and gently buoyant, without the telltale manic edge many sativas tend towards. If your low-key solution to a canceled Halloween bash is an intimate dance party, this is the strain for you and your three guests.

Jack the Ripper was bred from a clone of Jack’s Cleaner and a male variation of Space Queen known as Space Dude. The resulting flowers are dense and resinous with a  terpene profile rich in terpinolene and pinene. Anticipate measured notes of fruity funk and crisp pine on a velvety exhale.

Candy Kush is, biologically, a balanced hybrid, but this strain can produce results on either side of the fulcrum depending on the how, where, and why of its consumption. One effect, however, seems ubiquitous despite the user’s disposition: legendary munchies. So whether you’re waking and baking or resting and congesting, stock up your Halloween candy bucket before indulging in this strain.

Candy Kush is a mashup of OG Kush and Trainwreck — some phenotypes display a spicier sativa dominance, while others gently slant into a complacent indica. And the “Candy” designation refers to more than just expectable munchies, this strain terpene profile is loud with limonene and myrcene, a nuanced combination that’s lemon tart in the nose and candy-sweet on exhale.

For those introverted who’ve already made a Halloween date with their couch, fave blanket, and a curated scary movie playlist, Monster Cookies is the strain to keep you locked in and chilled out all night long — or at least until you snack yourself to sleep. Often referred to as a nighttime strain, the high is deeply relaxing in both mind and body. The head tends to be cottony and insulative, while the body feels softer than a cartoon ottoman. The result is a deeply stoney indica effect that dances on the razor edge of elation and tranquilization.

Born from a marriage of GSC (formerly known as Girl Scout Cookies) and Granddaddy Purple, this cultivar’s terpene expression is peppery on top with tart underpinnings of citrus and pine on the tail end of the exhale. The aroma is reminiscent of Grandaddy Purple with notes of grape and berry pulling the most attention, but overall the mouthfeel is earthy and mild.

If you’re looking to feel some measure of full Halloween fantasy this year, scope out our pal Frankenstein. No one knows who the parents are, but legend has it, it emerged from the wild depths of the Pacific Northwest. The strain’s designation is firmly an “indica forward hybrid,” but reported effects vary from deep relaxation and muffled cognition to a springy euphoria that’s gently energetic. This mystery strain is truly out here living up to its name.

The terpene profile is brightly herbal, with nuanced inflections of myrcene, pinene, and minty ocimenepresenting as either richly herbaceous or funk on funk on funk, depending on your sniffer’s interpretation of the terps. The exhale is mild and silken, with some reporting a deeply floral aftertaste and other admonishing an astringent, perfume-like flavor.

How will Frankenstein affect you? Will y’all be BFFs or will this strain terrorize your whole town? Guess you’ll have to try it and see.

Hell Fire OG delivers both a euphoric sativa onset and a pacifying indica plateau. The name seems to indicate a fiery ambush of irreverence, which everyone just loves on Halloween, but that’s only face value. This strain’s straightforward heritage (OGs up and down the family tree) has resulted in a high that’s equal parts swinging from chandeliers and resting in meditative stillness, arguably the greatest way to quarantine during a full moon Halloween.

Hell Fire OG is a hybrid of OG Kush and SFV OG Kush, and as such carries on the signature, mild lemony diesel aroma of its parent strains. The terpenes are led by myrcene, with caryophyllene and pinene playing supportive roles, resulting in an exhale that is sweetly herbal and effortlessly sheer.

Spooky Season just wouldn’t be the same without strains like Ghost Train Haze, a boisterous sativa that hits hard and lasts long. This strain’s reputation for high-key manic energy makes it terrifically fun for physical adventuring, but larger doses can be overwhelming for lower tolerance users or those prone to stoner paranoia, so puff cautiously. The head high is typically creative and euphoric, with an effervescent body high that operates at a lifted vibration.

Ghost Train Haze is parented by Ghost OG and Neville’s Wreck, indica and sativa hybrids respectively. Though Ghost Train Haze claims one relatively mollifying strain as a parent, its phenotype is a powerful expression of stereotypical sativa dominance with complex notes of terpinolene and myrcene, underpinned by a delicate suggestion of limonene. The resulting mouthfeel is mildly herbal and reminiscent of tropical fruit.

Death Star is a potent indica hybrid with an aroma that is pure skunky earth. Though the strain leans indica, the high is more complex than that designation can describe. The onset is typically a slow one, tentatively wading into the deeper waters of the user’s psyche before blossoming into a powerfully relaxing body/mind euphoria. If your Halloween plans involved dressing up your dog as an Ewok, or doing some form of Star Wars cosplay, for the love of George Lucas, include this strain to keep the vibes from turning to the dark side.

Though Death Star delivers an undeniably deep indica high, it’s parentage is an even sativa/indica split. Death Star is a hybrid of Sensi Star and Sour Diesel, with a terpene profile that boasts caryophyllene in front and myrcene and limonene in the back. The resulting exhale is earthy and peppery, with a muted, fruity undertone.

This hybrid strain leans ever so slightly towards its indica lineage, its high is overwhelmingly relaxing yet sparkling with creative euphoria. Halloween revelry this year is going to require a bit of ingenuity on our end, and Phantom OG is a great strain to lose yourself while building cardboard robot costumes for your hedges or paper mache skulls for your porch..

Phantom OG is another OG Kush baby, but this strain is decidedly mellow, with its most prominent effect reported as sleepy. If you’re planning on getting stoned enough to ignore whatever brave trick or treater darkens your doorstep, Phantom OG will set you on your way. The terpene profile is a balanced rapport of caryophyllene and limonene and a whisper of hoppy humulene bringing up the rear. The aroma is pine-sol bracing with the slightest suggestion of herbaceous mint, while the mouthfeel is lemony and crisp, with a smooth, sheer exhale.

Find Phantom OG strains
Keep out of reach of children. For use only by adults 21 years of age or older.